Customized Blending Systems are designed by Sonic Corp to improve and streamline manufacturing windshield washer fluids. A typical washer fluid formulation consists of water, methanol, glycol and dye. The most common but rather inefficient means of blending these ingredients is batch mixing in large tanks. In this case, each ingredient is transferred in large volumes one at a time to the batch tank. This is time consuming and labor intensive. It is also difficult and dangerous to handle that volume of methanol and other hazardous materials.

Sonic’s TechBlend systems are custom engineered and fabricated to meter these various raw materials from their source at proper ratio so that a final blend is delivered to a storage vessel or directly to a filling line. Systems employ various types of flow meters and PD pumps to provide robust and accurate metering and ratio control. Pumps ramp up to required flow rates within 5-10 seconds and maintain required flow rate within 0.25-0.35% accuracy when using mass flow meters. Turbine flow meters can be used with these low-viscosity fluids at an accuracy of 1-2%. This means that only small volumes of fluid, within the skid’s piping scheme and transfer lines, are present in the making area.

One of the huge benefits of using an inline blending skid for the manufacture of windshield washer fluid is the reduction of methanol volume present at any time. With batch mixing tanks, you will transfer high volumes of methanol to a large tank. Therefore, the tank will have to be installed in a hazardous rated area meeting class 1 div 1 requirements.

A continuous system that draws raw material from their respective sources, usually outside the building, can be installed in a lesser classified area because it holds much less volume of the methanol than a batch tank. The methanol is now transferred in a diluted state, as it is combined with the water and dye, to the filler or hold tank. The methanol no longer needs to be handled in large volumes by itself, reducing fire code requirements that would otherwise have to be followed in a batch mixing situation.

The skid features full PLC automation control to automatically keep pace with a filler line or fill a hold tank on demand based on level switch indication. The automated scheme maintains proper feed ratio via PID loop control between VFD and flow meter per PD pump. Pump starvation is avoided through inlet-side pressure detection. Batch counters are used for filling to guarantee vessels are not over filled.

There are many benefits to inline blending over batch mixing to manufacture windshield washer fluid: 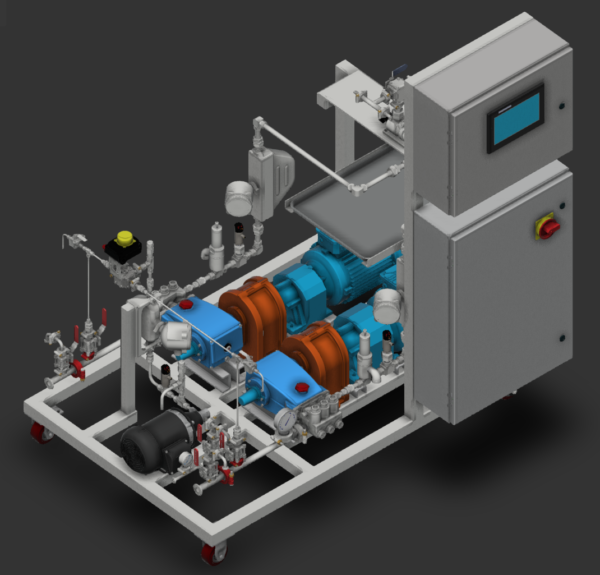 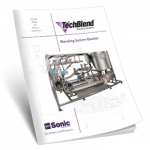