Using a High Pressure Homogenizer for silicone emulsions is commonplace.  Silicones and silicone fluids are so universally used that we come across them in everyday life without even knowing it. We see them in sealants, caulks, adhesives, lubricants, medicines, cleaning and shining products, electrical insulation and so on.

Silicone fluid needs to be homogenized when it is introduced to other materials or water in the manufacturing of silicone greases, lubricants or coatings.  Silicone mold release agents require homogenization to emulsify and disperse the silicone uniformly throughout the water phase.  Sonic Corp has worked with paper companies such as Kimberly Clark and P&G to homogenize release agents using our Sonolator High Pressure Homogenizer.

Dow Corning manufacturers a wide range of silicone solutions and has been using Sonolator homogenizing technology for over 50 years.  One of the greatest benefits of the Sonolator is its ability to be used in multiple-feed homogenizing processes.  Sonic is the only company that designs and manufactures inline emulsification systems that meter various liquid streams and processes inline using high pressure and no mechanical shear!

There are many companies that design and manufacture Inline Blending Systems, Sonic being one of them, but there is only one that designs and builds multiple-feed high pressure homogenizer systems.  Sonic has been making such systems for over 55 years.  The Sonolator lends itself well to efficient inline emulsification without any moving parts or mechanical shear.  This allows for process predictability and scalability from lab volumes to production scale approaching 100 GPM.

As the P&ID here illustrates, we design high pressure mixing systems to meter, in this case, 3 liquid streams such as silicone fluid, water and surfactant.  In some cases, we use only two liquid streams because the surfactant is premixed with water phase prior to homogenization. 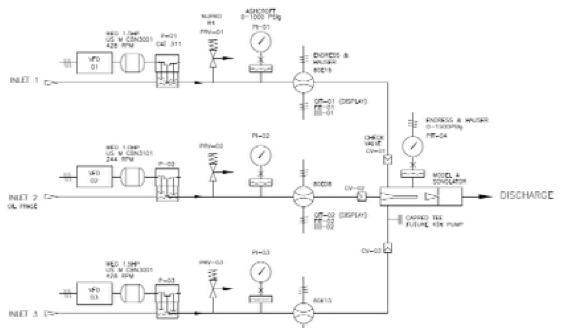 We drew the attention of Dow Corning back in the late 1960’s, see blog post on homogenization in the food & beverage industry, because we proved that the silicone fluid could be metered from bulk alongside the water at proper ratio and be emulsified inline at high pressure to create an instant emulsion.  Prior to this, they were transferring the silicone and water to a process tank and mixing for a considerable time.  High shear rotational mixers were added to the tanks to improve process time.  The Dual-Feed Sonolator homogenizer systems we sold them reduced process time much further and eliminated the process tank!  Now emulsifying the silicone fluid with water at differing temperatures was a simple matter of how quickly we wanted to pump inline.  We don’t have great images for the systems dating back to the 60’s and 70’s but here’s a photo of a dual-feed Sonolator homogenizer systems built in the early 1990’s.