You may have noticed, or not, that many of my blog posts are relatively dry and technical. Well, a colleague recently encouraged me to lighten up a bit and share with you some images from my recent trip to South Korea. I traveled to Korea to start-up two new Sonolator Homogenizer systems recently purchased by one of our customers.

While starting up new mixing system and training operators and maintenance personnel is nothing new, traveling to South Korea to do a start-up is. In fact, the only system Sonic had in operation in South Korea was installed in 2002. The unit is still in operation today, but up until 2016 was the only unit Sonic had operating in South Korea.

With the installation of two more systems in South Korea, I hope this will mark a new era of Sonic working with South Korean companies to help improve their mixing operations. Not only would this be good for business here at Sonic, but I’m excited by the prospect of returning to beautiful South Korea!

My first day in South Korea involved traveling 3 hours south of Seoul to Iksan — a medium sized city on the peninsula. I met with our client and their team. They had already installed the systems, piped to inlet and outlet, and put power to the system. I can’t go into specifics about the customer because of non-disclosure agreements and the secretive nature of their business. However, I can tell you that I was working in a brand new, state-of-the-art facility. The workmanship was impeccable and given our customers expertise the start-up went smooth. 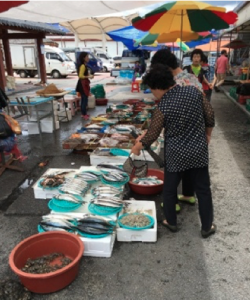 Lunch was Bibimbap – a rice bowl. It was beef, vegetables, rice and chili sauce. The Bibimbap was accompanied by two types of kimchi, cabbage and radish, and cow’s blood soup. Well, I wasn’t crazy about the soup, but the rest of the meal was amazing. 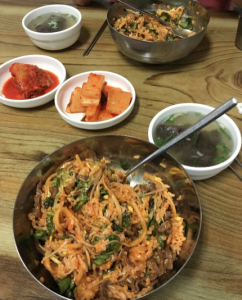 After work on the first day my host took me to visit some of the local sites which included a Buddhist temple. Then, off to a museum before they closed for the day. 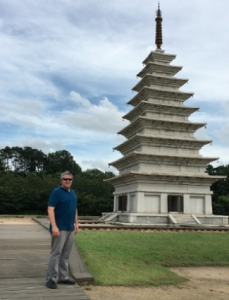 Post museum we were at another restaurant within Iksan cooking fresh Korean beef at our table. Yes, the food in Korea is amazing. A very large array of fresh vegetables are the mainstay accompanied by meat and often rice. 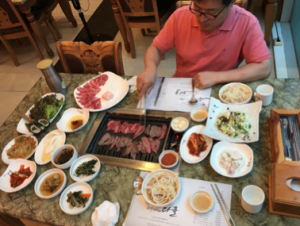 By the way, it helps if you know how to use chopsticks because I did not see a fork for the first three days while I was there. Granted, I did not have to ask for one because my roommate in college taught me how to use chopsticks — thanks Matt! Perhaps if I asked, someone might have been able to produce a fork, but they were not in plain sight.

In addition to enjoying the wonderful food, I lost five pounds while there for 5 days! You can tell from the pictures I was not shy — I ate everything in sight. Since my return I have learned to make the Bibimbap bowls at home and sought out Korean restaurants here in the states. In my opinion, eating so well and losing weight at the same time is part of the magic of Korea!

Work was completed after three days and my host returned me to a hotel in Seoul. I was fortunate to have a free day touring Seoul before the return flight home. Seoul, the fourth largest city in the world, is a beautiful city that has a wonderful mix of modern and old world charm. Everyone I met was extremely polite, friendly and helpful. Many of the young people in Seoul speak English, so asking for directions when I was lost was no problem. The subway in Seoul is the nicest subway I have ever traveled. The subway system is extensive and allows you to go almost anywhere in the city for about $1.50. Signage in the subway is in both Korean and English, so it was easy to navigate and the stations and trains were perfectly clean — no funky summer smells like my “home” subway in NYC.

My time in South Korea was truly wonderful. If you get a chance to go — I highly recommend visiting. I hope to make more trips as Sonic works to provide mixing solutions to South Korea’s many manufacturing businesses in the future.

About the Author: Rob Brakeman